This from wiki; (Dante Alighieri):

Dante was born in Florence, Italy. The exact date of his birth is unknown, although it is generally believed to be around 1265. This can be deduced from autobiographic allusions in the Divine Comedy. Its first section, the Inferno, begins, "Nel mezzo del cammin di nostra vita" ("Midway upon the journey of our life"), implying that Dante was around 35 years old, since the average lifespan according to the Bible (Psalm 89:10, Vulgate) is 70 years; and since his imaginary travel to the nether world took place in 1300, he was most probably born around 1265. Some verses of the Paradiso section of the Divine Comedy also provide a possible clue that he was born under the sign of Gemini: "As I revolved with the eternal twins, I saw revealed, from hills to river outlets, the threshing-floor that makes us so ferocious" (XXII 151–154). In 1265, the sun was in Gemini between approximately May 11 and June 11.[3] 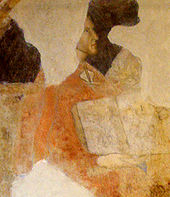 Portrait of Dante, from a fresco in the Palazzo dei Giudici, Florence
Dante claimed that his family descended from the ancient Romans (Inferno, XV, 76), but the earliest relative he could mention by name was Cacciaguida degli Elisei (Paradiso, XV, 135), born no earlier than about 1100. Dante's father, Alaghiero[4] or Alighiero di Bellincione, was a WhiteGuelph who suffered no reprisals after the Ghibellines won the Battle of Montaperti in the middle of the 13th century. This suggests that Alighiero or his family may have enjoyed some protective prestige and status, although some suggest that the politically inactive Alighiero was of such low standing that he was not considered worth exiling.[5]
Dante's family had loyalties to the Guelphs, a political alliance that supported the Papacy and which was involved in complex opposition to the Ghibellines, who were backed by the Holy Roman Emperor. The poet's mother was Bella, likely a member of the Abati family.[4] She died when Dante was not yet ten years old, and Alighiero soon married again, to Lapa di Chiarissimo Cialuffi. It is uncertain whether he really married her, since widowers were socially limited in such matters, but this woman definitely bore him two children, Dante's half-brother Francesco and half-sister Tana (Gaetana). When Dante was 12, he was promised in marriage to Gemma di Manetto Donati, daughter of Manetto Donati, member of the powerful Donati family.[4] Contracting marriages at this early age was quite common and involved a formal ceremony, including contracts signed before a notary. But by this time Dante had fallen in love with another, Beatrice Portinari(known also as Bice), whom he first met when he was only nine. Years after his marriage to Gemma he claims to have met Beatrice again; he wrote several sonnets to Beatrice but never mentioned Gemma in any of his poems. The exact date of his marriage is not known: the only certain information is that, before his exile in 1301, he had three children (Pietro, Jacopo and Antonia).[4] 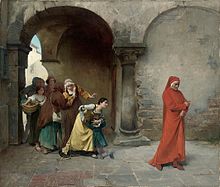 Dante in Verona, by Antonio Cotti
Dante fought with the Guelph cavalry at the Battle of Campaldino (June 11, 1289). This victory brought about a reformation of the Florentine constitution. To take any part in public life, one had to enroll in one of the city's many commercial or artisan guilds, so Dante entered the Physicians' and Apothecaries' Guild. In the following years, his name is occasionally recorded as speaking or voting in the various councils of the republic. A substantial portion of minutes from such meetings in the years 1298–1300 was lost during World War II, however, so the true extent of Dante's participation in the city's councils is uncertain.
Gemma bore Dante several children. Although several others subsequently claimed to be his offspring, it is likely that only Jacopo, Pietro, Giovanni and Antonia were his actual children. Antonia later became a nun, taking the name Sister Beatrice.
Posted by Larry Clayton at 5:36 AM