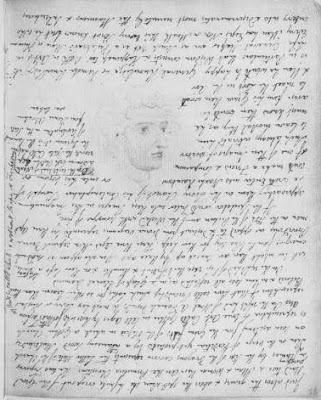 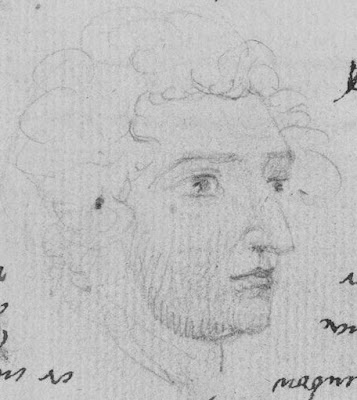 Blake filled Robert's notebook after his beloved Brother's death. When he ran out of pages he turned the notebook upside down and filled it from the opposite direction. The portrait
of Catherine was inverted when he wrote text for A Vision for the Last Judgment. 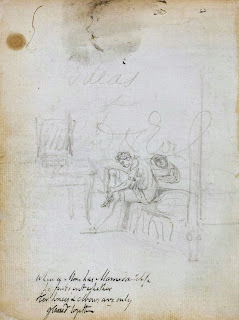 Among the notes and sketches in Blake's Notebook appear two images of his wife. Bake used the Notebook to record images and ideas as they occurred to him. These two images were not intended for inclusion in future works of art. They were spontaneous responses to the domestic scene which surrounded him. This was the woman who shared his bed and his table, who ran errands for him and helped with the printing process. She was Enitharmon to Blake's Los. When inspiration came to him, she helped him bring his vision into the physical world.
If William and Catherine had to struggle to adapt to living together as husband and wife, we would find remnants of their striving in Blake's poetry and pictures. In the Four Zoas, Enitharmon suggested to Los that her efforts had less value or permanence than his did. The products of her hands 'vanish again into my bosom.' If her work could be assimilated into the forms sublime which Los was fabricating, their life together would acquire a new dimension.

This can be seen as a breakthrough in the relationship of the young couple. If William recognized that Catherine was capable of working as an artist alongside him as he produced the Illuminated Books, it would eliminate some of the tension between them. Her creative energy would be directed toward producing something of real sustained value. He would benefit by not being alone against all the forces which conspired to thwart his achieving his aspirations.

Alexander Gilchrist wrote in his early biography of Blake that the production of the Illuminated Books was a joint project. Other authors may be dependent on designers, engravers, printers and publishers but Blake found another way to present the product of his creativity. Together "the Poet and his wife did everything in making the book, - writing, designing, printing, engraving, - everything except manufacturing the paper: the very ink, or color rather, they did make." He didn't mention coloring the images and binding the books at which Catherine became proficient.

Posted by ellie Clayton at 4:07 PM