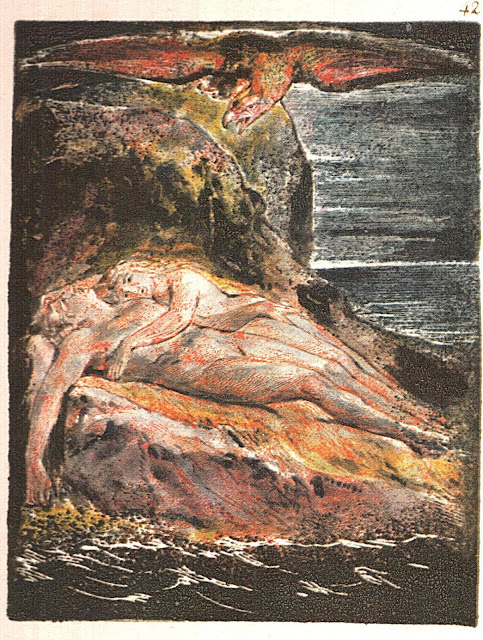 I recently ordered William Blake: Poet . Printer . Prophet, another inexpensive used Blake book from Better World Books, without knowing exactly what to expect. I am please that I received a thin volume produced for the exhibition at the Smithsonian Institution in 1964 of 'faithful facsimilie[s]" created for the Blake Trust. Although the Trianon Press project specialized in expensive, high quality prints in limited numbers for museums, libraries and collectors, there are reproductions in this volume which seem to be closer to Blake's intent than can be observed in other media.

Besides the plates from The Book of Urizen, Song of Innocence and of Experience, Visions of the Daughters of Albion, Thel, America, Milton and Jerusalem, there is text by Geoffrey Keynes outlining the life and work of Blake in clear, factual prose. Lessing Rosenwald provided an Introduction which focused of the work of the Blake Trust and the Trianon Press in making Blake's art more accessible to the public in copies which authentically approximate the originals.

From the Introduction:
"In order that the public may have a 'report of their stewardship', the Trustees of the Blake Trust have organized this exhibition."

From the London Bookseller Peter Harrington:
"In one of the most remarkable literary projects of the 20th century, the William Blake Trust established the Trianon Press with the intention of creating faithful reproductions Blake’s works, in order that the consumer might experience them as their maker had originally intended. These exceptional facsimiles were issued throughout the 1950s and 60s  by the Trianon Press. Sir Geoffrey Keynes, one of the trustees, had seen at an exhibition in Boston some extraordinary facsimiles of Cezanne’s watercolours, and the idea to reproduce Blake’s works as closely as possible in quality and form to the originals was born between himself and Arnold Fawcus, the Press’ founder. Hand-stencilled and hand-coloured, the books were produced at great expense and with great attention to detail, and printed on Arches pure rag paper, made especially to match that used by Blake."