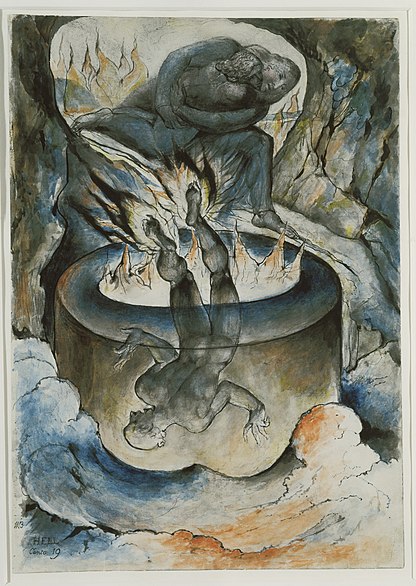 Posted by Larry Clayton at 3:00 AM

What an interesting passage... and sin... and punishment... and depiction...

I found this at the Tate website:
"In Hell, Dante and Virgil meet those guilty of simony (buying or selling ecclesiastical preferment). Like all simoniacs, Pope Nicholas III is punished by being suspended head downwards in a well of fire."

And this on Wikipedia, the "Simony" article:
"payment in exchange for their empowering him to impart the power of the Holy Spirit to anyone on whom he would place his hands. The term also extends to other forms of trafficking for money in "spiritual things"."

Trafficking for money in spiritual things sounds a lot like the "hireling" priests against whom early Quakers preached, and also reminds me of the desire to "monetize" pretty much anything of value, nowadays...

Re 'Trafficking for money in spiritual things' takes me back to my earlier days:
1. Our bishop was obviously the most completely materialistic clergymen in our conference.
2 As a pastor I was expected to have a nicer house than the generality of our Parishiners; it was paid for with their money.
3. In fact pastors were expected to raise money to send up to the conference.
4. St. Paul asked for no money for preaching.
etc.etc.etc ad finitum